With the past two series that we were able to complete this weekend, we are exactly a third of the way through the regular season, in terms of series that we have completed. The Ironmen have been able to play half their season already, and the Hillcats and the Crusaders have been able to complete a third of their season. To be halfway through the season, the Nighthawks need to play against the Hillcats and the Crusaders.

During the third of the regular season that we have played, we have had some great games, including two that have gone to six innings. The Ironmen came out victorious in both of the games that have gone to extras. The Crusaders made history as the first team to sweep a series, when they won three out of a possible three games against the Hillcats this past Monday. The Hillcats grabbed the first series win in IWL History against the Ironmen.

With all of that said, it's about time that we have our first in-season power rankings. 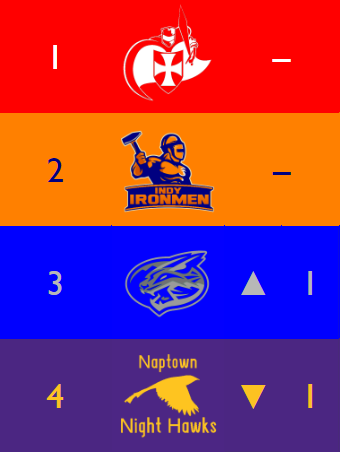 With games being played this week after Opening Day weekend was postponed due to numerous reasons, we feel that it's only right for the first set of power rankings to be released.

The first series on Friday will be between the Crusaders and the Hillcats.

After an eventful draft at the commissioner's house, the rosters for all of the teams are set. Everything for the first season in the history of the Indianapolis Wiffleball League is set and ready to go for Opening Day. Within the next couple weekends, the first ever series in IWL history will take place between the first rivalry in IWL history, the Circle City Crusaders and the Hoosier State Hillcats. Albeit the history of both sides are short, the two teams are already intense rivals, and the matchup will be fun to watch.

However, prior to that, the commissioners uploaded the second video onto the IWL official YouTube channel after the completion of the first IWL Draft. The video goes through each round and lists off which player got picked when and where they are headed. In the future, the commissioners will upload more frequently as the season officially gets under way.

You can get to the video three possible ways from here:

Regardless of where you watch the video, please subscribe to the YouTube channel so that you can watch most, if not all, of the series throughout the first season, including the 2019 IWL World Series down the road.

After a vacant April and May, and over two months of nothing on our part, we can confirm we are, in fact, not dead. With finals and sports and other obligations, neither of the commissioners, or the other captains, for that matter, have really put too much thought into the league and its status. However, with school over and summer in session for most, we are able to say that the league is in the forefront of all of our minds.

Prior to the inactivity on our part, we had not reached the point of the inaugural draft, meaning that none of the teams are set. After a third run through of confirmations of potential players for this upcoming season, the inaugural Indianapolis Wiffleball League Draft for the 2019 season has been set for Sunday, June 2nd. All of the captains will meet up at a yet to-be-determined  location (probably one of the captain's house) and a yet to-be-determined time (probably not 2:51 a.m.) to make their picks that will decide the outcome of the season.

With that said, Opening Day is planned to be the weekend of June 8th, but the final judgment will be made later this week. In conclusion, the inaugural IWL Season will be kicked off with the draft this weekend and, within the next two weekends, the legitimate season will be underway. Make sure to stay tuned!

A Beginning of An Era | 2019 IWL Season Preview

Although most of you most likely already know through social media, this evening, the commissioners posted the first video on the league YouTube channel and you can go check it out now.

The video is hopefully the first of many on the channel, so make sure to subscribe to be able to keep up with the content. As some may know, the commissioners are planning on having all of the games recorded to be able to post onto YouTube. Eventually, the games may be live-streamed on the channel, so if you want to check those out, stay tuned to the IWL's YouTube channel. You can scroll down to the bottom of the page and press the YouTube emblem, or you can click the link right here. Also, you can get the link to a certain video by going to the newly created "Videos" tab, which can direct to the specific video you're looking for.